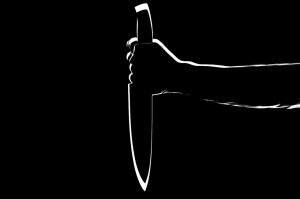 In hindsight, I probably should have known that taking a large butcher’s knife into school – shoved inside my backpack amongst my textbooks and pencil case – wasn’t the smartest idea I’d ever had. My intentions were innocent though, so it simply didn’t occur to me that I might be doing the wrong thing.

It was a prop for a drama performance and instead of buying a fake knife, I just grabbed one out of the kitchen drawer.

I’d written the monologue myself – a girl wakes up from a nightmare screaming. The CD player by her bed is blasting Metallica’s ‘Unforgiven’ as she wakes. She sits up in bed, turns down the music and explains that she’s been having this recurring dream ever since ‘the accident’. An accident in which her little brother drowned after her father intentionally crashed the family car into a lake, while she and her parents survived.

In the dream, she says, she wakes in the middle of the night to unexpectedly find a knife under her pillow, creeps from her room and murders her parents. The monologue ends with her discovering the knife under her pillow. She takes the knife and says, ‘sometimes dreams come true’, before storming from the room and slamming the door shut behind her.

I thought it was brilliant:

(In truth though, I think I just wanted an excuse to let out a blood-curdling scream during class).

After my piece was finished, my teacher said, in a carefully restrained voice, “Could I please have that knife?”

I can’t remember if I received a good mark for my performance, but I do remember some of the feedback: Firstly, ‘The music was too loud and too distracting’ and secondly, ‘Next time, please don’t bring an actual knife into school.’

In the past, if you’d asked me what I was like at school, I would have told you I was a pretty good student. That I didn’t really misbehave in class. That I did my homework, worked hard, followed the rules, stayed out of trouble.

I think maybe I was actually a nightmare as a student.

Apart from giving my poor drama teacher a heart attack by screaming at full volume and brandishing a large knife during class; throughout my time at Crestwood High, I also smashed a mirror in the girls’ bathroom – cutting my hand on the glass in the process – in a fit of overly dramatic despair because one of my friends wasn’t speaking to me. I asked an older guy to buy me cigarettes at Crestwood shops – whilst wearing full school uniform. I refused to read ‘Lord of the Flies’ in English because I claimed it was too upsetting. And on a school trip to Queensland, I snuck out of my cabin in the middle of the night to see a cute, older boy who I’d met that day.

I’m sorry I was such an asshole. I promise I didn’t mean to be.