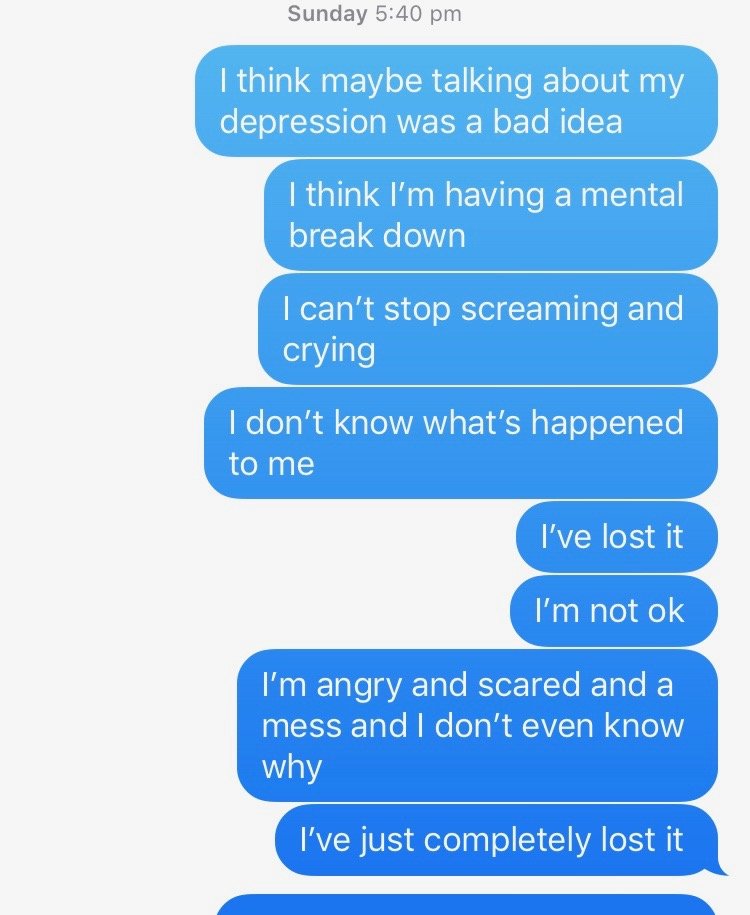 You know how sometimes an old injury can play up? Maybe a bad knee. Or an achy shoulder.

And it’s perfectly normal when someone asks how you are to shrug and say, ‘Oh not too bad, but my knee’s been giving me some trouble.’

And maybe you can give a reason. The weather, it often acts up in the cold.

Or maybe you can’t quite explain it. I don’t really know… I just woke up this morning and bang – it’s flared up on me.

But wouldn’t it be nice if you could have the same conversation around mental health?

Oh, not great, the old depression’s acting up again.

Shit, really? Something set it off? Or it’s just popped up out of nowhere?

Because that’s how mental health often seems to work. You can be going along just fine and then one day, that dark shadow you’ve been keeping at bay is back. And sometimes you know why. You’ve been stressed. You haven’t been sleeping well. Or a specific incident has set it off. Or else you have no idea why it’s back. But you suddenly find you’re feeling down or anxious, and you can’t seem to shake it off. And perhaps you can have the above conversation – maybe with family or friends. But often, you can’t.

For me, I know why it’s back. A week ago, I spoke to 280 people about post natal depression. It was for The Canberra Writers Festival and the topic was ‘Lightbulb Moments.’ When I started trying to figure out what I would say for my ‘lightbulb moment’ – a transformative occasion in my life, I realised that I knew what it was. It was the moment when my PND was first recognised and I got help. I wrote my speech and I practiced it, several times. During every practice, when I recounted the moment where I hit absolute rock bottom, my voice cracked and tears fell.

On the night of the speech, I stood on a stage under the lights and looked out at an audience blanketed in darkness. I told them my story. Afterwards, I was given feedback from several women. Powerful. Beautiful. Brave. I was proud of myself and I felt good about sharing my experience. Maybe it could help someone else, maybe it would encourage others to speak up if they were struggling.

But what I didn’t expect was to wake up the following day with horrible stomach cramps and a strange sense of despair.

Later that day, I was driving home from Canberra. Three hours alone in the car with my thoughts. As I started driving, lines from my speech began swirling around my head. A rage began to build, from deep inside my gut. Within half an hour, I found myself screaming. I slammed my fist against the steering wheel and the inside of the car door. I sobbed. I dug my fingernails into the skin on my chest. I lost control in a way that I haven’t experienced in many, many years. It was like I’d been transported right back to the worst stage of my life. It was as though I’d done none of the work to get better. It was as though nothing was okay and nothing would ever be okay.

It was as though I wanted to crash my car into a tree. A thought I hadn’t had in years.

I pulled over and sent a flurry of text messages to my husband.

I don’t know what’s happened to me.

For the rest of the drive home I went up and down. I would slow my breathing and regulate my thoughts and then something would set me off and I’d lose it again.

When I finally arrived home, I wiped my face and pretended everything was okay when the kids ran down the stairs to see me. But Piper noticed the red scratch marks on my chest. ‘What’s that?’ she asked.

‘Oh, nothing, just a scratch.’

I didn’t know what to say. I brushed it off.

Later, in the shower, I saw raised red welts. A purple bruise bloomed on my hand and my arm ached.

For the next few days I struggled to get up in the mornings. Sleep kept sucking me back down. I kept thinking, I don’t want to go back to that place. I don’t want to let this overcome me. I need to fight, but I can’t remember how.

One afternoon, I went to my usual café after sleeping all day. The owner smiled at me, ‘where have you been today, mate?’

I considered the question. I wondered if I should lie. And then I answered.

‘Why’s that? Not feeling well?’

‘I’m down. I think I set my depression off again.’

He made my coffee and then he brought it around the counter, put in down in front of me and gave me a hug.

I realised something. It is possible to have that type of conversation. You just have to have faith in the people around you. There was no awkward silence. No uncomfortable pause as he wondered what he should say. Instead, he gave me the hug that I needed and made me feel normal, valid.

Next week, I go back to my psychologist.

I’m not going down without a fight. 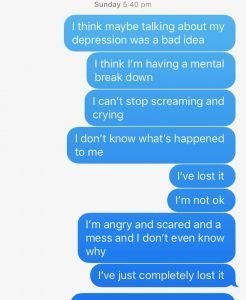